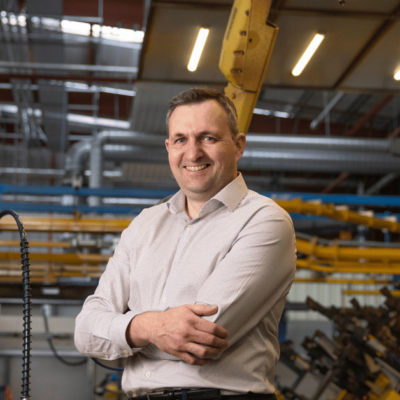 “The challenge is the people aren’t there in the market that you’re looking for with the required skillset.”

The Challenge – how to sustain an advanced manufacturing operation in Galway for the long term.

Thermo King is a world leading manufacturer of transport refrigerators with a strong presence in the Galway region for over 46 years. The challenge facing the management team was how to sustain an advanced manufacturing operation in Galway for the long term.

The company pioneered transport temperature control back in 1938 and today its solutions include temperature control systems for vans, trucks, trailers, air and sea containers. Thermo King’s solutions are focused on the food we eat everyday – including fresh, chilled and frozen – to pharmaceuticals, flowers, electronics and even musical instruments and luxury cars.

According to its Advanced Manufacturing Engineering Leader Shane Coss, the key challenge was making the move from a mechanical to automated engineering manufacturing process. The company, which currently employs approximately 650 people, had roughly 90 engineers on site with the vast majority skilled in the mechanical area.

“The challenge is the people aren’t there in the market that you’re looking for with the required skillset. As a company we can’t stay still, we must constantly evolve. Digital transformation, advanced manufacturing, industry 4.0 is coming at us, it’s here,” said Shane.

Thermo King found it increasingly challenging to recruit talent for new roles and needed to pivot the internal team to build new skillsets.

Dermot O’Neill, Network Manager at Cobotics Skillnet said the biggest challenge facing companies engaging with Cobotics Skillnet is a lack of skills in the digital automation space. “Those technical skills are being demanded from every jurisdiction in the world so we’re competing for talent all over the world,” he said.

The Solution – Upskilling for digitalisation of the manufacturing process

Thermo King focused on finding a solution within the existing talent pool it had in Galway. The company engaged with Cobotics Skillnet and together they collaborated with Atlantic Technological University (ATU) on tackling the challenges facing the sector and began the process of identifying solutions to deliver the required talent.

The Cobotics Skillnet has co-developed programmes such as the Advanced Manufacturing, Automation and Robotics degree programme with ATU in partnership with Skillnet Ireland. This collaboration plays a key role in facilitating engagement between industry and the higher education sector in the co-creation of new programmes to meet future skills.

The Cobotics Skillnet’s mission is to boost robotic and automation density in Ireland.

“Dealing with an industry-led problem that engages third level education and Skillnet Ireland is a perfect solution to delivering on skill shortages including upskilling and cross-skilling of employees in Ireland,” said Dermot.

Chris Gannon, a Technician with Boston Scientific, is currently doing an advanced manufacturing programme co-developed by Cobotics Skillnet, industry and ATU. He said: “These days, as an automation technician, you would expect to have a good proficiency with mechanical and electrical as a given. If you’ve got software that’s great but it’s very difficult to get people with all three attributes. That’s why I am on the programme, because I need to become more proficient with software. This means you can walk into any problem on most automation systems and make an implementation or intervention.”

The Outcome – A model for the reshoring of manufacturing

Upskilling and cross skilling the workforce at Thermo King helped to secure their transformation from a mechanical to digitalised architecture and compete and win internal business across the global organisation.

“We upskilled a lot of our people in the maintenance team, engineering teams, so they could become the people that would support our advanced manufacturing strategy into the future,” said Shane.

He added: “We’re already seeing the benefits. We’re less dependent on solution providers and less dependent on our traditional partners. We’re more capable of sustaining and keeping things in production ourselves.”

Dermot highlighted the impact Cobotics Skillnet upskilling and cross-skilling interventions have made to companies like Thermo King who have made the leap from manual processes to now having fully automated processes.

“Upskilling and cross-skilling of existing employees is helping workers to further develop their career in advanced manufacturing. Their jobs might have been taken over by automation but now it has enhanced their careers as they progress as technicians or engineers at different levels. You now get a whole cross-pollination of people driving the organisation forward as they adopt new technologies into their processes,” said Dermot.

Thermo King, one the largest manufacturing companies in Ireland, has become a beacon for companies to follow in terms of reshoring manufacturing to Ireland with this development.

For Shane and the management team at Thermo King, working with Cobotics Skillnet into the future is two-fold.

“Firstly, we’d like to continue the benchmarking, visiting other sites, seeing the challenges they faced, and solved so we can learn from it, and hopefully not reinvent the wheel. Secondly, we hope for continued support as things evolve, technology is always changing. We need to continue that collaboration into the future to make sure that we’re always ready with people, not with processes or products. We have the people here that can evolve and that can take on any challenge and solve it,” he said.

Thermo King is the global leader in transport refrigeration and heating for trailers, trucks, buses, rail cars and shipboard containers.

Cobotics Skillnet is a business network for companies of all sizes in the robotic and automation technology sector. Network companies work collaboratively to share best practice and to respond effectively to the specific skills needs of the sector. The network addresses both technical and non-technical skills needs.

Find the right network and training for your business and team.

Receive regular news and insights from the world
of talent development straight to your inbox.

Receive regular news and insights from the world of talent development straight to your inbox.

Design by Bradley: The Brand Agency

Skillnet Ireland Company Limited by Guarantee is registered in Ireland. Registration No. 298694