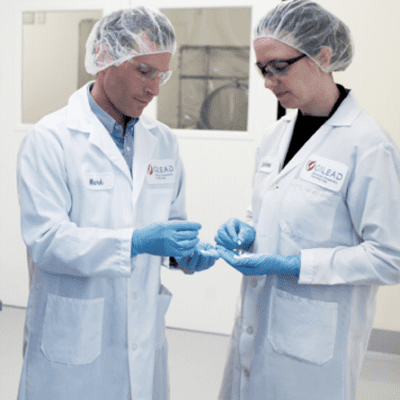 Networking through the Irish Medtech Skillnet gives us a huge competitive advantage. Companies in Ireland share knowledge freely and I doubt this happens to the same extent in the US and other countries.

This model is used as a ‘Best in Class’ model for companies to measure themselves in areas of lean manufacturing. It can be used by any sized company, in any sector, at any stage of their lean journey.

John O’Shea, Operational Excellence Manager for Gilead Sciences Ireland participated in the training.
“It was through our networking with the Irish Medtech Skillnet that we became aware of the MÓR™ Benchmarking Model.”

John attended the one day MÓR™ training workshop and GSI partnered with a similar company who had used MÓR™ and were more mature on lean journey than GSI, as well as being a good match geographically. They went into a mentor and mentee relationship and as part of that GSI ran a MÓR™ Benchmarking Model.

John explains: “We created a cross functional team on site for the exercise and gained a lot of insights through honest conversation. We repeated the assessment and brought in an external consultant who ran their own assessment. The consultant came in for three days and did a huge number of interviews across the site and rubber-stamped where we were on the model. It was a great experience, the neutral advice from the consultant was valuable and the benefit of that advice is going to come this year.”

Gilead Sciences has also participated in training, networking and best practice visits with other Skillnet Ireland networks including BioPharmaChem Skillnet, Advanced Productivity Skillnet and Business Excellence Skillnet. By working with more than one of our networks, companies can maximise their capacity to engage with enterprise-led training.

Gilead Sciences is a big company but Gilead Sciences Ireland would have needed to fund the Shingo Model™ locally. However MÓR™ was much more cost effective thanks to funding from the Irish Medtech Skillnet. The Network recommended a consultant and gave 25% reduction on fees.

John says: “The MÓR™ model is an easier, less expensive way to do benchmarking, you can get a lot out of it if you do it well. Now we can move more confidently, step by step.”

Since introducing the MÓR™ Benchmarking, GSI ran the model twice, first in 2015 and then again in December 2017. “Taking part accelerated the team performance. It’s setting us up now to go to the next level in becoming world class.”

Gilead Sciences is a biopharmaceutical company that develops and commercializes innovative therapeutics in areas of unmet medical need. Gilead's Ireland operations employ over 300 people in Dublin and Cork and are responsible for manufacturing, quality control, packaging, and the release and distribution of the company's products in the European Union and other international locations.

Irish Medtech Skillnet is a business network for companies of all sizes in the medical technology and engineering sector. Network companies work collaboratively to share best practice and to respond effectively to the specific skills needs of the sector. This Skillnet addresses both technical and non-technical skills needs.

Find the right network and training for your business and team.